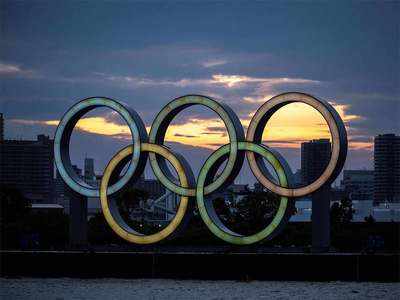 The ancient Olympic Games were primarily a part of a religious festival in honor of Zeus, the father of the Greek gods and goddesses. The festival and the games were held in Olympia , a rural sanctuary site  in the western Peloponnesos.
The Greeks that came to the Sanctuary of Zeus at Olympia shared the same religious beliefs and spoke the same language. The athletes were all male citizens of the city-states from every corner of the Greek world, coming from as far away as Iberia (Spain) in the west and the Black Sea (Turkey) in the east.

The sanctuary was named in antiquity after Mt. Olympos , the highest mountain in mainland Greece. In Greek mythology, Mt. Olympos was the home of the greatest of the Greek gods and goddesses. The Olympic Games is a quadrennial (held every four years) international multisport event celebrated as a global sports festival by people all over the world. The Games are the largest sporting celebration in the number of sports on the programme, the number of athletes present and the number of people from different nations gathered together at the same time in the same place.

The ancient Olympic Games began in the year 776 BC, when Koroibos, a cook from the nearby city of Elis, won the stadion race, a foot race 600 feet long. The stadion track at Olympia is shown here. According to some literary traditions, this was the only athletic event of the games for the first 13 Olympic festivals or until 724 BC. From 776 BC, the Games were held in Olympia every four years for almost 12 centuries.

Contrary evidence, both literary and archaeological, suggests that the games may have existed at Olympia much earlier than this date, perhaps as early as the 10th or 9th century BC.

The roots of today’s Games date back to the ancient Olympic Games, held over 2,000 years ago. Also known as the “Olympiad”, the event took place in the Olympia region of ancient Greece. It is believed that the event was an athletic and artistic festival dedicated to the worship of the gods. However, the ancient Olympic Games were hindered by numerous conflicts and finally came to an end in 393 AD. Fifteen hundred years later in 1892, a French educator named Baron Pierre de Coubertin began the Olympic revival movement. De Coubertin’s idea to reinstate the Olympic Games was presented to the audience at the international congress in Paris, 1894 and his proposal was unanimously approved. Two years later the first modern Olympic Games were held in Athens, Greece, the homeland of the ancient Olympic Games. The date of the first Games, 1896, marked the beginning of an extraordinary adventure that has now lasted for over a century. De Coubertin is thus revered as the “Father of the Olympics”.

What do the five rings of the Games signify?

The well-known five rings symbol of the Olympic Games were also created by Baron de Coubertin, to express the solidarity of the world’s five continents. According to the Olympic Charter, “the Olympic symbol consists of five interlaced rings of equal dimensions (the Olympic rings), used alone, in one or in five different colours. When used in its five-colour version, these colours shall be, from left to right, blue, yellow, black, green and red. The rings are interlaced from left to right; the blue, black and red rings are situated at the top, the yellow and green rings at the bottom.” The Charter says “the Olympic symbol expresses the activity of the Olympic Movement and represents the union of the five continents and the meeting of athletes from throughout the world at the Olympic Games.” The symbol has gone through several changes over the years. Today, there are seven official versions of the Olympic rings. The full-colour version on its white background is the preferred version.

What is International Olympic Committee?

The International Olympic Committee (IOC) is the guardian of the Olympic Games and the leader of the Olympic Movement. Established on June 23, 1894, the IOC is a not-for-profit independent international organisation. Based in Lausanne, Switzerland, the Olympic Capital, it is entirely privately funded and distributes 90 per cent of its revenues to the wider sporting movement, for the development of sport and athletes at all levels. The organisation acts as a catalyst for collaboration between all Olympic stakeholders, including the athletes, the National Olympic Committees, the International Federations, Organising Committees for the Olympic Games, the Worldwide Olympic Partners and Olympic broadcast partners. It also collaborates with public and private authorities including the United Nations and other international organisations.

What are the various sports in the Olympics?

In Athens in 1896, nine sports were on the programme: athletics, cycling, fencing, gymnastics, weightlifting, wrestling, swimming, tennis and shooting. The Olympic programme has come a long way since then: some sports have been discontinued (e.g., polo and baseball); others were dropped and then reintroduced (e.g., archery and tennis), while several new sports have been added (e.g., triathlon and taekwondo). The two major sports on the programme of the Summer Games are athletics and swimming. Athletics consists of a wide range of events: jumping, throwing, and sprint, middle-distance and long-distance races. Winter sports include sports like bobsleigh, curling, ice hockey, figure and speed skating, skiing (cross-country and ski jumping) and the military patrol race. The three main sports on the Winter Games programme are skating, skiing and ice hockey.

What are Summer and Winter Games?